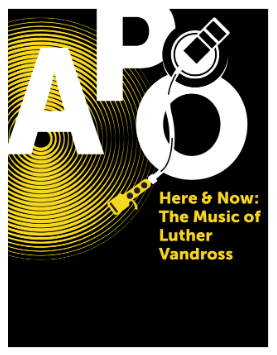 WASHINGTON — In his life, he won eight GRAMMY awards, sold over 35 million records worldwide, and filled arenas around the world. On Sunday, April 7, The American Pops Orchestra will bring the music and style of the legendary Luther Vandross back to the nation’s capital.
The American Pops Orchestra, conducted by Luke Frazier, will present “Here and Now: The Music of Luther Vandross,” beginning at 3 p.m. at THEARC DC at 1901 Mississippi Ave., SE, Washington, D.C. Frazier has worked with artists who were close to Vandross such as Patti Labelle and Vanessa Williams.
The performance will include songs Vandross wrote such as “So Amazing,” as well as other widely known works that some may not realize have a Vandross connection, such as with David Bowie’s “Young Americans.”
Singers will include Helen Hayes award-winner Nova Y. Payton, “The Voice” semi-finalist Rayshun LaMarr, Birdland Jazz Club’s Natalie Douglas, and many more. WAMU’s Tamika Smith will serve as host.
APO’s mission is to present innovative programming, featuring groundbreaking concepts to develop and inspire a new audience to appreciate and enjoy live music. DC Metro Theatre Arts has called APO “an innovative group of artists [that] are reinvigorating the tunes you know and love with a contemporary flair that never fails to please.”

Following this performance, the final show of the season will be “I Am What I Am: The Music of Jerry Herman,” on May 18.

Tickets and further details about all the performances are at www.theamericanpops.org.