Astronomy Festival on the National Mall

Astronomy Festival on the National Mall
21 May 2019 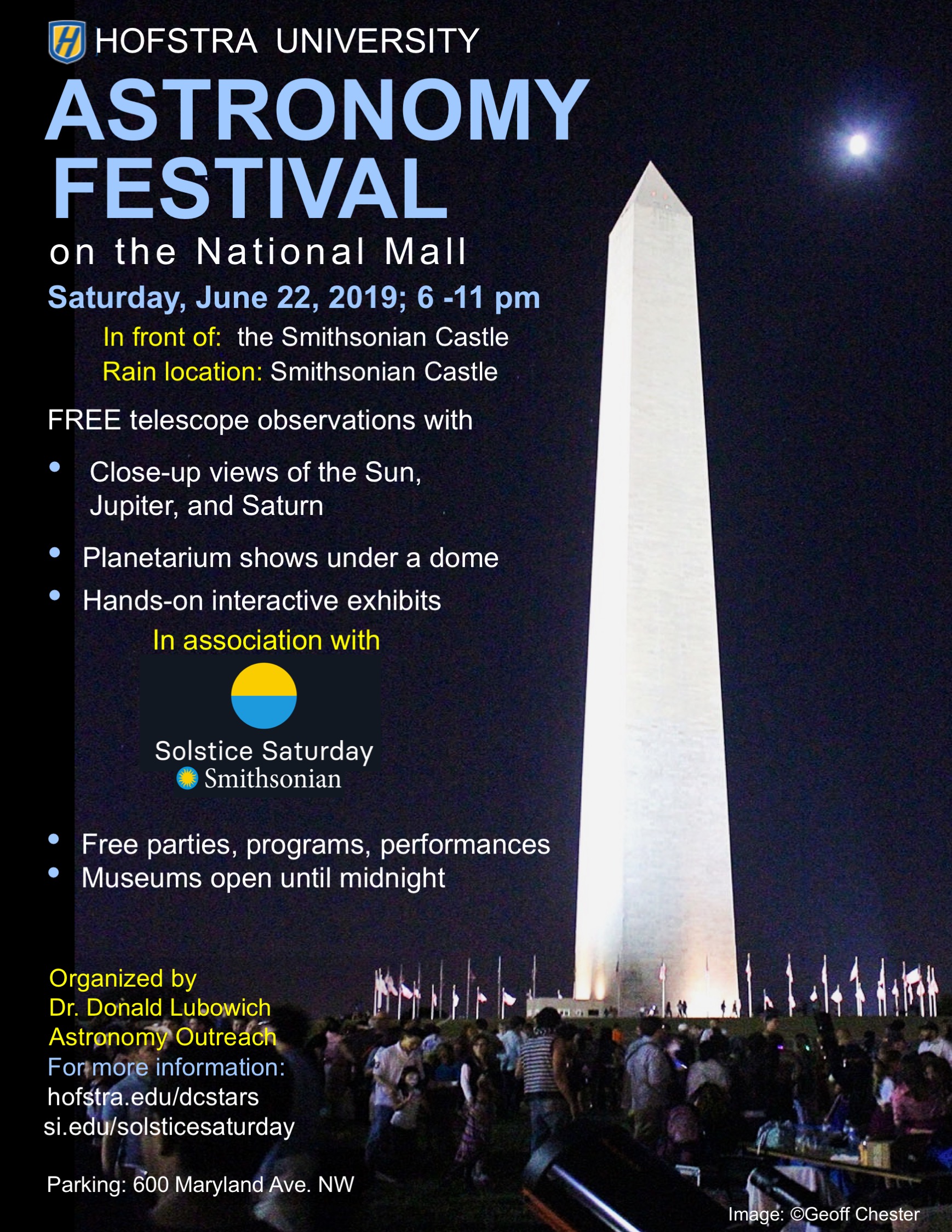 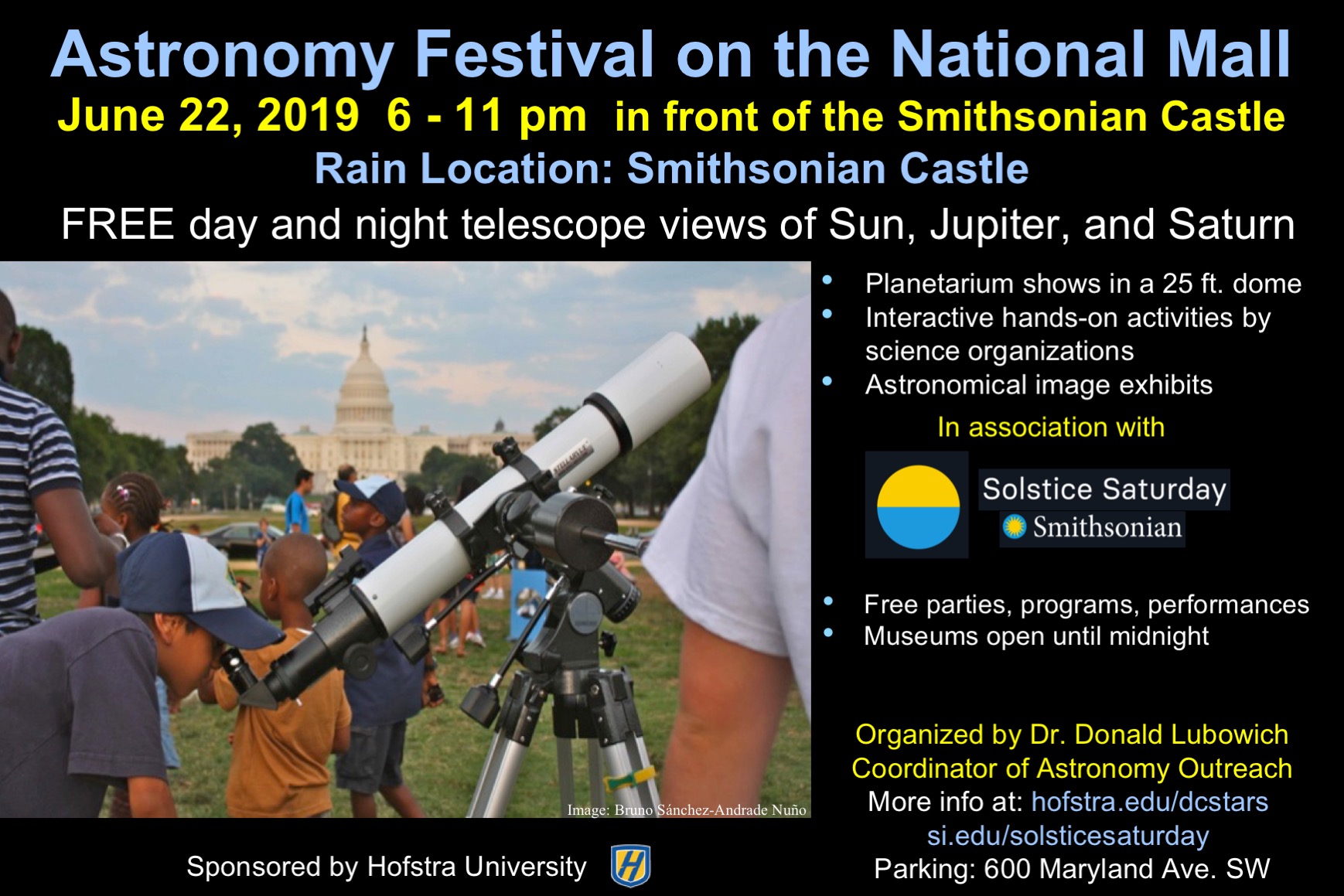 Astronomy Festival on the National Mall

in front of the Smithsonian Castle (1000 Jefferson Dr. SW)

Celebrate the Summer Solstice with Telescope Views of the Sun, Jupiter, and Saturn

at the Largest Annual Astronomy Outreach Event in The US

In Washington, DC, on Saturday June 22th from 6 to 11 pm, visitors will be a given a free guided tour of the sky at the Astronomy Festival on the National Mall.  This free public festival is organized by Dr. Donald Lubowich, Coordinator of Astronomy Outreach at Hofstra University.  The Astronomy Festival on the National Mall (AFNM) will feature solar, optical, and radio telescope observations; hands-on activities, demonstrations, hand-outs, posters, banners, and videos; a planetarium show under a 25-foot blow-up dome, and a chance to mingle with astronomers.

This year the Astronomy Festival on the National Mall will be presented in association with the Smithsonian Solstice Saturday events (www.si.edu/solsticesaturday).  The National Air and Space Museum and the Smithsonian Museums will be open until midnight featuring free parties, programs, and performances.  Representatives from some of the nation’s foremost scientific institutions, organizations, and universities will present exciting demonstrations and answer questions about the latest astronomical discoveries or careers in science.

Dr. Lubowich and local amateur astronomers will set up twenty-five telescopes on the Mall. Starting at 6 pm, visitors will be able to view sunspots with the help of specially filtered telescopes.   After dusk and until 11 p.m. telescopes will provide close-up views of Jupiter and its moons, the Saturn with its beautiful rings, colorful double stars, and star clusters that sparkle like diamonds on black velvet.

“Bringing astronomy to the National Mall and partnering with astronomical organizations gives us a very special opportunity to encourage children to pursue their interest in science or math and to promote public understanding of science,” said Dr. Lubowich. “Gazing at the rings of Saturn or the Moon’s craters captures the imagination, no matter how old you are.”  AFNM started in 2010 as part of a NASA-funded Music and Astronomy Under the Stars program, which brought an astronomy festival to outdoor concerts throughout the US, and was co-sponsored by the White House Office of Science and Technology Policy.

Metro: Smithsonian.  Parking is available at 600 Maryland Ave., SW; S. of the National Air and Space Museum. Update at  www.hofstra.edu/physics 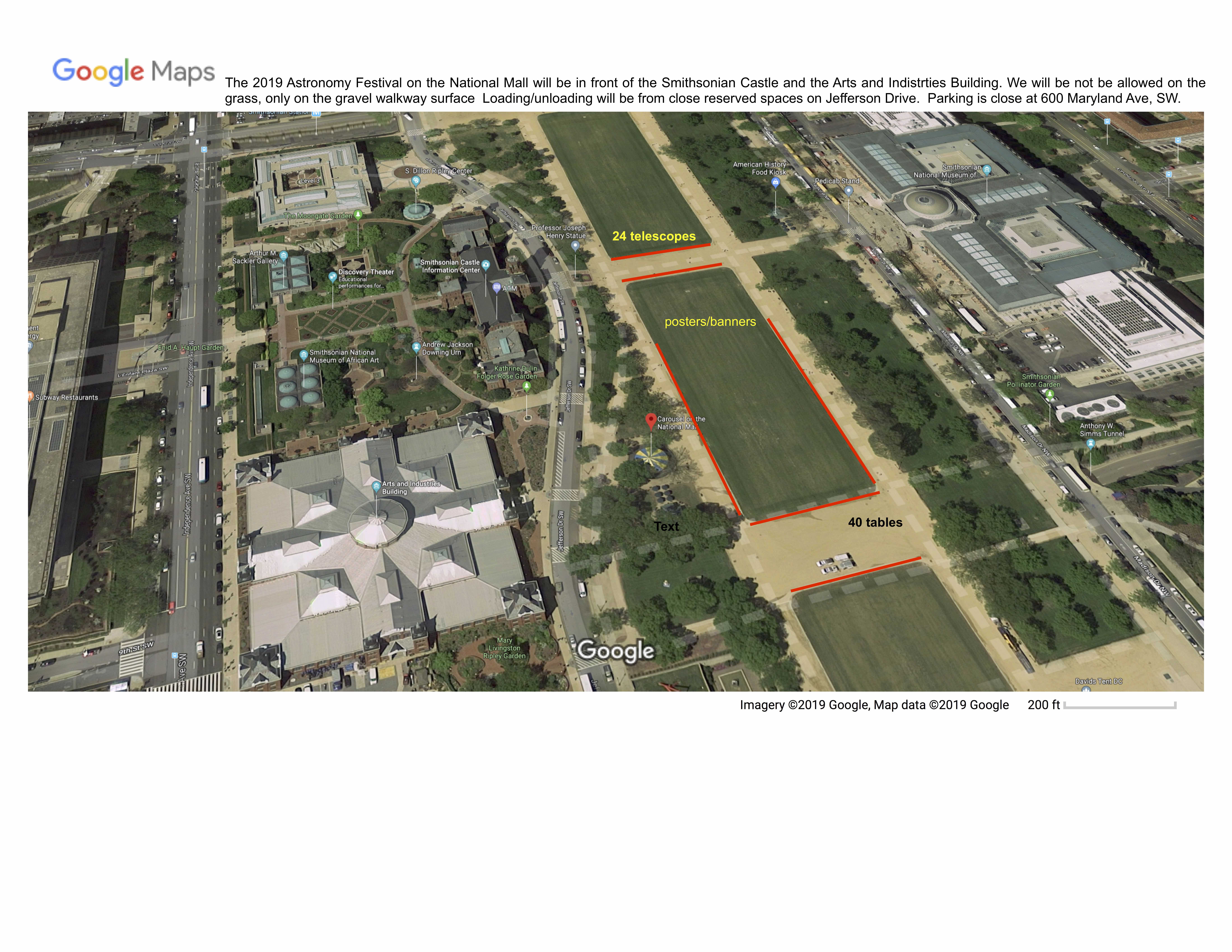